In view of momentous events in the USA, Iain Bailey who is currently blogging on ÉMIGRÉ LONDON, kindly asked to be stood down for a couple of days so the Picnic community could welcome back RICK SCHMIDT of whom we are so proud.  As you will know, he is the author of BLACK PRESIDENT.

Ten years after I started work on a fictional work about a Black man becoming President of the United States, I’m literally hours away from seeing that fantasy possibly become a reality.  The big day of selecting a Black President has finally arrived!

It’s still dark outside my California coastal windows as my wife prepares to walk about a half mile to a local church where our neighborhood residents can cast their vote.  She’s trying to get there early enough that when the polls open at 7AM she’ll be near the front of the line. (I’ll hear later about details such as length of line and how the voting process went for her!)  I decided to take time yesterday to vote early in Downtown Oakland, at the courthouse where a friend had gone days before (he happily reported that the entire process took him only about fifteen minutes!).  Fortunately I had our car, so I drove the five or so miles and started looking for a parking place reasonably close to the location.  As I was circling the block I got lucky, being right behind a spot that was opening up.  When the woman driver saw my car hovering behind she jumped out and handed me her parking stub, saying, ‘It’s good until 10!’  Nice to have a little gift from a stranger who had just voted!  At any rate, this was a good sign that I was doing the correct thing by voting a day early to avoid some kind of last-minute clog in the works.

It was already 9AM and I hoped I could get through by 10, to allow time for breakfast before work at noon.  I wasn’t sure I could hold up to a ten hour wait like some have had to endure. And I’d heard that in some states there were already ‘dirty tricks’ taking place.  It was reported that in some Southern states, fliers were distributed with what looked like an official state seal, announcing that the Republicans’ voting day was Tuesday, while Democrats day at the polls was WEDNESDAY ( a day AFTER the votes would be counted!).   What else was/is going on is anybody’s guess!

At any rate I parked, grabbed my umbrella and walked the two blocks in the rain, finding a fairly short 150-foot-long line extending out from the top of a ramp at the side of the courthouse.  The rain was fairly light, and the people in line were friendly.  I discovered that the people in line were a mixture of voters and people present for court appearances.  We all had to follow the line into the building for examination by metal detectors.  Within twenty minutes I was emptying my pockets and pulling off my belt with its metal buckle.  When my watch made the machine beep the policeman told me to hold my arm up chest-high.  Walking through again, the machine was silent.  Following a few small hand-written signs I found myself in the basement with a small and eager crowd of voters.  I printed out my name, address and signed a form, then handed my data in at an available window.  The young woman clerk said she’d be back in a minute and was, presenting me with the official ballot, my name and address clearly printed out on the envelope that accompanied it. (The computers seemed to be doing what they should do, finding a name in a database to create a valid document that could not be disputed later!)

I quickly connected the arrow next to Obama/Biden (filled in the center of an arrow that had a blank center), marked in various other propositions, measures and political offerings, exited the building past my fellow East Bay early-birds and drove home in twenty minutes. (Total voting excursion = 1 hour).

Watching TV today, I see the long lines at various poling locations around the States, and hope people can withstand the weather and physical strain to get the votes in!

In honor of the historic implications of today’s US VOTE, please allow me to add this picture from a book I bought at a rare bookstore, entitled ‘UNREASONABLE RHYMES, told by Anne Idyott’. (Get it?!) It was drawn and water-colored in the late 1890s, and, to my shock, was an ORIGINAL artwork: 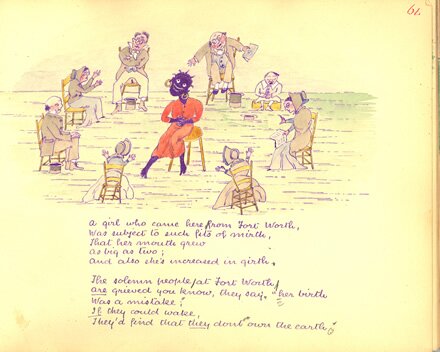 looking closely you can see little pinholes in the corners, along with penciled corrections to the text.  The book, with 80 original plates like this one, had been bound and sold as just another published edition – and luckily it was affordable!  At any rate, the image and limericks reflect on the PAST problems of racism in America.  Hopefully it will remind us of just how far we’ve come TODAY, as the votes roll in!